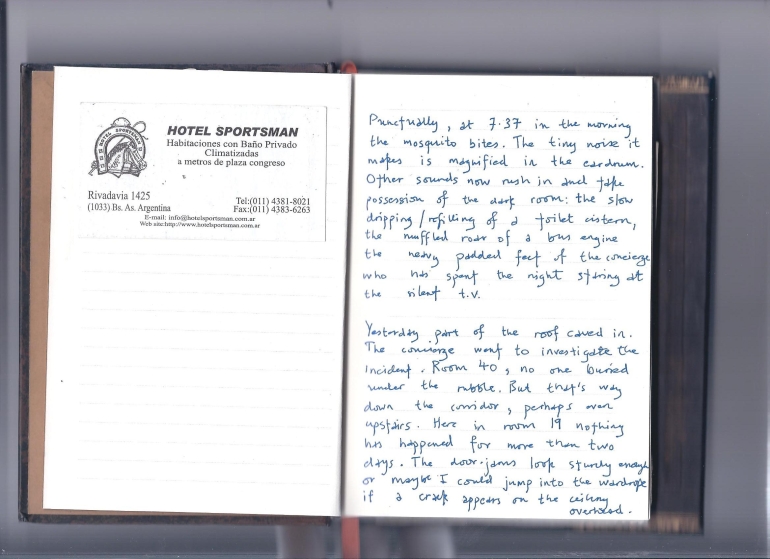 Punctually, at 7:37 in the morning, the mosquito bites. The tiny noise of its victory dance is magnified in the eardrum. Now, other sounds rush in and take possession of the dark room: the slow dripping and refilling of a toilet cistern; the muffled roar of a bus engine and the heavy padded tread of the concierge who has spent the night staring at a silent tv.

Yesterday, part of the roof caved in. The concierge diligently goes to investigate the incident. Room 40; no one buried under the rubble. He locks the door and hurries back to his perch behind the long wooden counter. Room 40. That’s way down the corridor, maybe even upstairs. Here in room 19 nothing has happened for more than two days. The door-jams look sturdy enough. I could jump into the cavernous wardrobe if a crack appears on the ceiling

I’m staying at a hotel in the centre of town. It’s called the ‘Sportsman’; it’s very cheap and it’s falling down. Yesterday part of the roof collapsed somewhere down the corridor. I have a large room with a good bed, a hand basin and an ancient ceiling fan. I haven’t managed to work this yet but, thankfully, the nights are cool.

The city itself is not at all like Paris. Whoever said that was either blind or drunk; or blind drunk. The view from the airplane the morning I arrived was the nearest it got to Paris. You could see the grid pattern of the streets perfectly.

So far I have wandered the neighbourhoods around the centre of town and find them dirty and unappealing for the most part. There are some decent cafés where you can relax for a couple of hours, but then the caffeine does strange things to your bladder and mind.

I have booked the room until Friday when I think I will leave Buenos Aires and travel south to a small town on the coast called Mar del Sur. The city is beginning to wear me down already. Just now I had to walk through the crowds for an hour to escape the noisy traffic. The buses all sound like tractors and belch choking fumes. I am at the edge of nice residential area as I write this: San Telmo. It is low-rise and relatively laid-back. I’ll probably go for a pizza around here later. I’m feeling quite stuffed since I had a steak and chips for lunch. It was so tasty I even chewed the bones for a while.

Yesterday I visited the botanical gardens in the northern part of the city. It is quite run down and overgrown but at least the air was purer. Later I saw a policeman give someone a good kicking in the street. No-one batted an eyelid. Also, a window-cleaner fell from a tall building onto one of the main boulevards. I didn’t see it happen but I’m sure he was dead.

Which leads us to Recoleta cemetary where all the goodly folk of the city are entombed. I was there today and took a stroll around the necropolis. There are hundreds of family tombs there dating back to the mid-18th century. Mostly small temples with padlocked iron gates, about two metres wide and of differing heights. The flashiest tombs are twice this width and have cupolas and sometimes even stonework angels standing on their domes. The older ones are badly dilapidated, and if you peer through the rusted gates you can see the mouldy woodwork of the coffins or a little altar where vases stuffed with withered flowers are laid out. There is generally a large crucifix hanging on the back wall. One of these I saw had broken apart so that Christ’s arms had fallen off his body and were tacked on bits of cross dangling in the air. There was often a plaque outside with an inscription such as: “¡Rosa! How you used to make us laugh. Your fond friends, Concha and Serafina.” I couldn’t resist opening the gates to one of the tombs and peering inside a coffin that had a broken lid. I couldn’t see anything in the darkness only some dirty satin lining. I could smell the odour of death, though – a kind of sweet musty smell.

Well, I hope you get this letter and that it finds you in good spirits.

The sign at the top of Avenida 100 reads: No se puede montar a caballos
Two grocery stores, a ferretería, a municipal health centre and the J.R. Café are the only places in town open for business at this time of the year: mid-November.
Facing a row of closed shops at the end of the avenue is the Atlantic Boulevard Hotel

My first question is abrupt.

“About a hundred and forty years”, he glances at me sideways from behind his shades, grinning.

I sent you a letter from B.A. just a couple of days ago. I sent it by registered mail so I hope it gets through okay.

These last few days I’ve spent in a tiny place on the coast about 450km south of B.A. For the most part, the coast as far south as the province of Patagonia is built up with high-rise resorts with names like ‘Mar del Plata’ and ‘Miramar’. Just a few miles from the latter I found this place: ‘Mar del Sur’. I caught the night-train from Buenos Aires last Thursday and had to take two buses in the early morning to get here.

So I arrived in a bus with about twenty school children at 8am. The driver had a little sign swinging from his rearview mirror saying “No hay mejor amigo que el Señor” (There’s no better friend than the Lord). The town itself is just an avenue lined with palm trees heading down to the ocean. About half a dozen dirt tracks crisscross this thoroughfare, going north and south. Very few places are open for business at this time of year; the season doesn’t start till mid-December. Still, there were a few people around. I asked a crazy old women with a huge yellow flower pinned in her white hair if she knew of anywhere I could stay for a couple of nights. She pointed out a few place but, inevitably, they were all closed. There are numerous small, dingy hotels but these were either dead-looking or under construction.

I headed into the hardware store and asked the man behind the counter if he knew of somewhere. He sent me to Jorge who owns some ugly chalet-type cabins on the main stretch but when I talked to him he advised me against taking one, saying that they were “meant for families of four”. Why families of four? Don’t ask. It seems pretty exclusive to me. I shrugged my shoulders and went back to the hardware man to explain my dilemma. Anyway, at last I found a bed in a married couple’s home a few blocks away.They showed me a room built on to the side of their own house with a sofa, a bed, a tv, a toilet and a kitchen. The price was 70 pesos so I accepted.

On Avenida 100, as the palm-treed street with the couple of shops is grandly called, there is a massive French-style hotel built at the end of the 19th century. Before then, there had been nothing here, only miles and miles of windswept pasture land for cattle to roam.

A Hungarian émigré named Schweitzer, president of the Banco Constructor de la Plata, decided it was the perfect place to build a kind of health resort for the sickly rich of Buenos Aires and other cities to come and recuperate with cocktails, backgammon and sea air. So the Boulevard Atlantic Hotel was founded in 1886. The investors were local ranchers and for a couple of years things went smoothly. Then the economic crisis of 1890 hit like a tidal wave across Argentina. Schweitzer was washed up and two years later put a bullet in his head in a hotel room in Buenos Aires. His European fantasy in the Pampas began the first of its many declines.

In the 1950s the tides turned once again for the stranded hotel. A new wave of people took an interest in the place and for the next few decades it thrived. One of these was a man called Eduardo Gamba. He first visited Mar del Sur in 1948 as a young dandy up from the capital for the summer vacation. He loved the place so much that he came back every year. He later proposed to set up a cinema at the hotel which would project the latest films onto a blank wall at the back of the ballroom. He worked as the hotel projectionist every summer until the owner of the place died. Another period of decline set in until Gamba, now near retirement age, came up with enough money to rent the place on a five-year lease at the end of the 1980s.

This is where the story turns very weird.

Gamba was absent most of the year except during summer. One summer, in the early nineties, he arrived from Buenos Aires to find that a local mobster and his gang had set up shop in the hotel and refused to budge. The local police were in on the racket so Gamba had very little ground to stand on. A law-suit would have ruined him financially. The mobster, a man named Solà, was using the hotel to store drugs and firearms for his smuggling operations. He lorded it over the townsfolk and people were afraid to challenge him.

Eventually, a baker, who also worked for the local electricity company, demanded that Solà pay the huge electricity bill that had been run up over the years. Solà refused and later the baker was found half-dead on the side of the road. He had been shot five times at point-blank range.  He miraculously survived for another month and was able to testify against the gunman. The gunman was arrested and a judge from Mar del Plata took up the case against the Solà gang. He and his mob were rounded up and evicted from the hotel in 1994.

Gamba took possession of the hotel again but, by now, the place was in very bad repair. There were pigeons nesting in the roof and part of the staircase had collapsed. I went to talk with Gamba, who gave me a tour of the place (for a small fee): the vast dining rooms, the tennis courts overgrown with weeds and the old ballroom where he still sometimes shows horror movies. He himself played a vampire in a short movie shot in the hotel in 1995. Gamba flogged me a copy of this before I could leave. The storyline is that a criminal and his girlfriend are on the run. The criminal has a bad leg and needs to stop for the night. Up ahead in the distance, the eerie Hotel winks on the dark Pampas. Having no other option, they call in. A gaunt, aged man with pointy teeth resides there alone. He serves them dinner and then prepares them a nightcap. Events become confused at this point. Scenes of the couple making passionate love in their quarters are interspersed with images of the vampire stoking a roaring furnace in the cellars. The DVD died here, but you can perhaps figure out the rest for yourself. The girl realises she is in fact having intercourse with the vampire who bites her neck and drinks of her warm blood. The newly enraged/engaged pair set upon the poor miscreant who manages to escape their clutches despite the handicap of his gammy leg. He drives off across the Pampas, not daring to look back at the vampire’s château, afraid even to imagine what the beastly bloodsucker is doing to his Bonnie Parker, and perhaps driving himself over a cliff.

Well, I don’t do happy endings, do I? 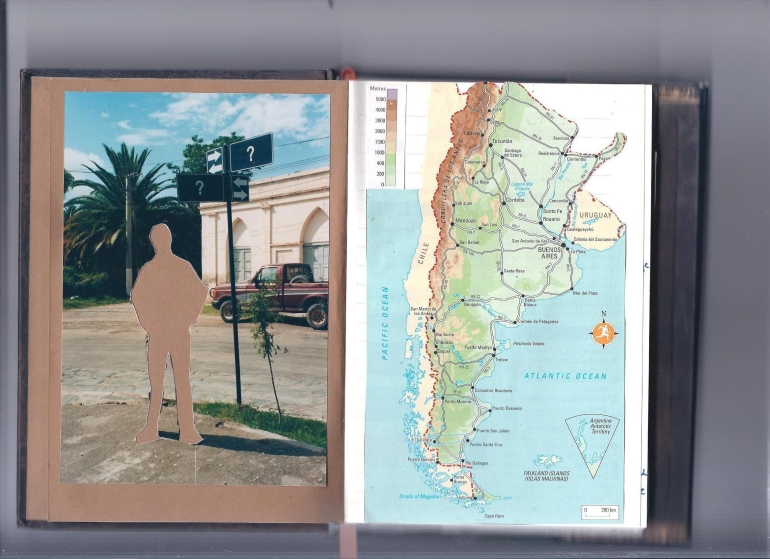