Archaeological evidence suggests that the remote and arid Calchaquí valleys in northwestern Argentina were first inhabited by migrant tribes sometime in the 5th century AD. From the 9th century onwards, this particular site, 20km from the town of Amaicha del Valle in the province of Tucumán, was occupied by the Quilmes tribe. The Quilmes were a sub-group of the Diaguita, a people whose territories stretched from Salta in the northwest to San Juan, hundreds of kilometres further south, along the Calchaquí valleys. 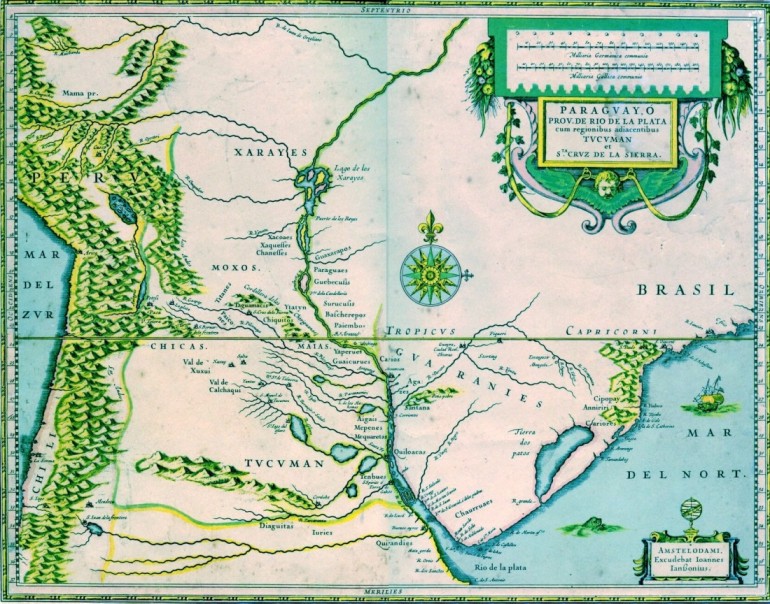 The two most striking features of the Quilmes ruins are the scale of the settlement, occupying a walled area of approximately 30 hectares, and the pukará, or hill-fortress, directly behind it to the west. The pukará faces eastward and consists of two steep hills cleft by an even steeper gorge, or quebrada. The enclosed settlement directly below and to the south of the pukará was known as the ‘City of Peace’; within it the Quilmes are thought to have lived and kept their livestock – llama, guanaco and vicuña – and to have cultivated maize and wheat among other crops. Agriculture was made possible by canaling water from a river issuing from the Cumbres Calchaquíes mountain range to the northeast. The large number of granaries and mortar stones found at the site, both inside and outside the enclosure, give us an idea of the scale of agricultural production needed to support the settlement’s increasing population, estimated to have reached at least 3,000 by the early 17th century.

Perhaps in times of war, women, children and the elderly, would climb up the steep paths of the pukará carrying vessels containing food and water – a very arduous task, as the paths are stony and precipitous. From here, one can imagine, they would have been able to witness their menfolk in close combat with the enemy far below without, however, being able to assist them. The hill on which the pukará rests was obviously chosen both as a lookout point and as a fortress of last resort able to withstand a lengthy siege. Dotted all along the paths winding up its sides are small fortified constructions which may have served as temporary dwellings during an attack. However, all such imaginative leaps are extremely difficult to substantiate; no written records exist from before the Spanish conquest, and all that remains on the high ground overlooking the settlement are shards of pottery and scores of deeply indented mortar stones.

One of these mortars seems also to have served a less mundane purpose. It is a large flattish slab of rock approximately 2.5m in length. On its surface, arranged in a line and separated by at least a foot each from east to west are 5 mortars: indentations a few centimetres deep. It is said that, around the time of the full moon, moonlight reflects in the water contained in each of these mortars, one after the other at equal intervals throughout the night.

Legend has it that the full moon had special significance for the Quilmes, as it was believed that on these nights the ancestral dead came into contact, by means of reflections and shadows, with the living. The many massive cardón cacti growing within the walls of the settlement were said to represent the spirits of dead ancestors fallen in battle. This impression was, and still is, exaggerated by the light of the full moon which lends to the cacti a fierce and disquieting posture; perhaps that of warriors lifting their arms and raising a battle-cry.

However, the preeminence of the moon as a cult-symbol was later usurped by the Inca-influenced veneration of the sun-god, Inti. Prior to the Spanish incursion into their territories, the Quilmes had witnessed the advance of the Inca Empire, which at its peak – roughly a century before the Spanish invasion – stretched from northern Ecuador down through Peru, Bolivia, Chile and northwestern Argentina as far as San Juan, imposing Inca culture and language in its wake.

Quilmes history came to a head in the 1580s during the first Spanish attempts at colonising the region. Famously, the Quilmes resisted Spanish conquest on and off until 1667. The great Calchaquí rising, led by Juan Chelemín, cacique of Hualfín, took place in 1630 and was followed by another war instigated by “The Inca Pretender”, Pedro Bohórquez, in 1657. The rebels were finally defeated, and the remaining Quilmes, an estimated 2,000 people, sent by the local Spanish governor on a forced march to Buenos Aires and other provinces to the east. Only a few hundred reached their destination; most died along the route and a handful of others managed to flee westward across the Andean ranges into Chile. Their language, cacán, which they shared in common with other Diaguita peoples, has survived only in single words found in placenames scattered around Argentina; an example being the word amaicha, which may either derive from the cacán verb meaning “to come together (for battle)/to unite”, or else from the verbs “to descend”, “to come down”. 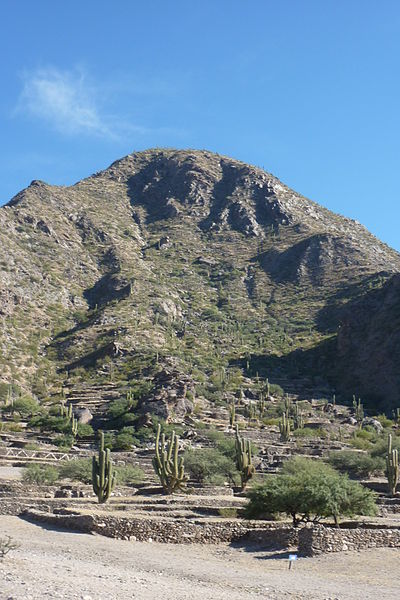 The pre-Columbian, mainly Inca, settlement of El Shincal lies five kilometres west of Londres, Catamarca – a town named in honour of the birthplace of Mary Tudor, Queen of England and Ireland, wife of Felipe II, King of Spain.

Entering the outer perimeter of the settlement one crosses a modern trench built to prevent flooding from the Río Quivil. Directly to the left are the ruins of what are said to have been the cacique’s residence. Above, to the right, is a small mound, on top of which is a fortified enclosure. About another 200m from this point the settlement proper begins.

The site is dominated by two flat-topped ceremonial mounds, or ushnu, with a backdrop of steep hills. The first of these mounds, approximately 50m in height, commands a view of the Sierra de Zapata in the distance, stretching southward into La Rioja province. To the east is the Sierra de Belén, which falls off abrubtly about 2km from here, opening on to a lush, green oasis of trees and marsh-grass.

There is a rough-hewn, partially restored, stairway climbing steeply to the summit of the first mound. From here, one gets a bird’s-eye view of the settlement’s layout: a large number of adjoining rectangular dwellings built of thick stone walls, or pirka, set with dried clay, and punctuated by gaps which must have served as points of entry and exit. The area covered by these dwellings and other walled structures radiating out from the mounds is perhaps 20 hectares. Looking closer, at regular intervals along the tops of these walls are square inlays, which apparently supported roof-beams made of dried cardón cacti. Interestingly, there are no oval or circular structures at El Shincal.

The most extensively restored structure is a walled enclosure believed to have been used by the Inca for civil and religious ceremonies; where, perhaps, military displays were held and various honours were bestowed or taken away. This structure is not unlike a semi-submerged early-Christian abbey in appearance; with low, lintelled doorways at either end – east and west. It was in this central ‘square’ that cacique Juan Chelemín, leader of the first Calchaquí uprising, was drawn and quartered, on the orders of the local governor, in 1536.

The second ceremonial mound, standing symmetrically in line with the first, has well-preserved steps leading to its summit, or platform. The Diaguita people, or more probably their Inca overlords, must have possessed a rudimentary system of geometry; each step cut into the mound has, roughly, the same height and depth (20 – 30cm). There are a total of 100 steps. There may even have been a double step every 12 steps or so, to allow for breaks during the steep ascent. Only vague traces remain of these ingenious ‘base camps’, largely obliterated during the mound’s “reconstruction”. Pirká walls were built into the sides of both mounds to prevent erosion.

Directly behind the mounds, to the north, is an overgrown trail, said to have been the “Trail of the Inca”. Its route can be easily traced along the the lower slopes of the hills. The Inca, who conquered the Diaguita in the century before the arrival of the Spanish, would probably have used it as a trade-route, transporting goods to and from their vast territories further north: foodstuffs, wool, prisoners, etc. Up higher are traces of fortified structures similar to those seen on the pukará, or hill-fortress, of the Quilmes – and therefore most likely dating from an earlier, pre-Inca, period.

What is not at all clear is how water was carried to the settlement. The Río Quivil lies off northwards at a kilometre’s distance, at least. It is difficult to make out, given the present rough state of the site, whether or not there was a system of canalisation/irrigation in place. The most probable explanation lies in a deep excavation directly below the two mounds, which may have served as a reservoir supplied with water channeled from the river.

Finally, the word ‘Shincal’ is thought to derive from the quechua chilka, designating a thorny shrub, flourensia campestris, which grows abundantly in the area and whose leaves are used to make a bitter-tasting infusion. 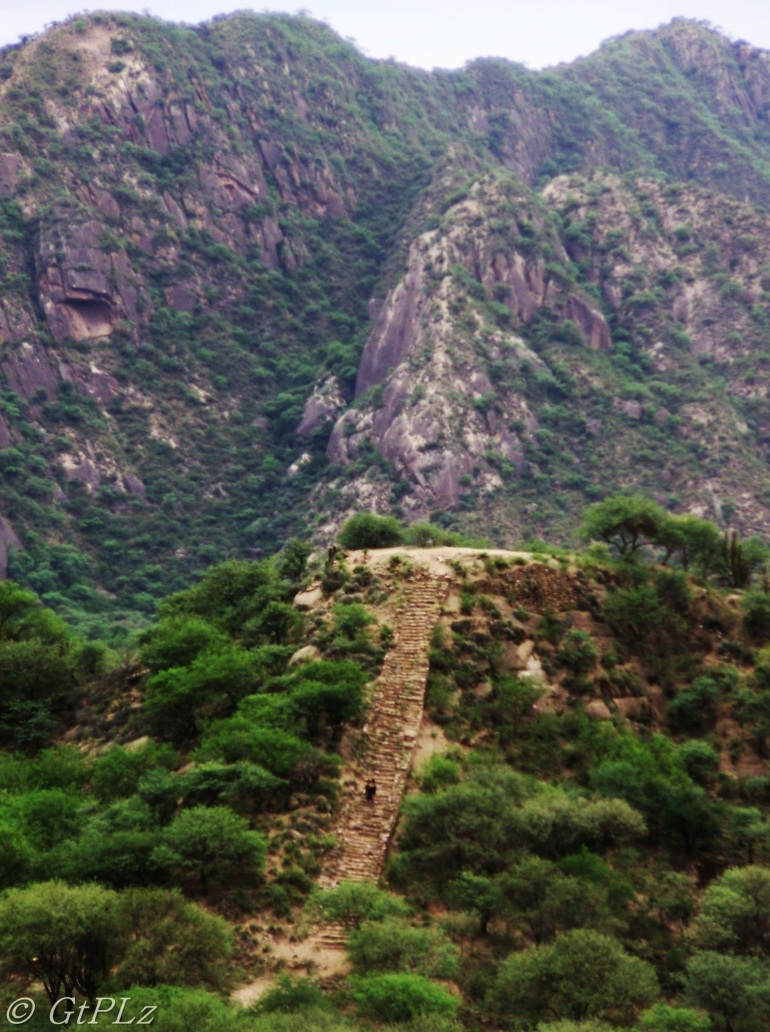